Our first 2020 tour, run in the period 2nd – 6th January, went smoothly and was very rewarding.  I guided two Swedish birdwatchers, Tomas Hedmark and Patric Carlsson, visiting the Bulgarian Black Sea coast to see the wintering Red-breasted Geese plus a few more target birds. Unfortunately the weather along the Bulgarian coast was very mild and only a few geese had arrived to winter in their traditional roosts in the beginning of January. So on one of the days we crossed the border with Romania, a bit further north, where there were already good numbers of Red-breasted and Greater White fronted geese. There we had great and memorable views of the Red-breasted Geese. Later, along the northern Bulgarian coast we got the Syrain Woodpecker and Middle Spotted Woodpecker, some Yelkouan Shearwaters in the sea, as well as a male Great Bustard – nowadays a rare winter visitor in Bulgaria.

In the foothills on the way to the Bulgarian southern Black sea coast we enjoyed great views of the Sombre Tit and Cirl Bunting.

The second part of our tour covered the Bourgas wetlands, where there were impressive numbers of wintering water birds, including the target birds of our guests – Dalmatian Pelican, Tundra Swan, White-headed Duck and Pallas’s Gull, thousands of Pygmy Cormorants, also Greater Flamingos, plenty of other wintering and resident  species of waterfowl, raptors (incl White-tailed Eagle), waders, passerines, etc.

The tour finished with 115 species of birds seen in just 4 days. We can still welcome you on our scheduled winter breaks and short tours. 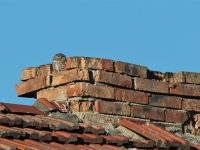 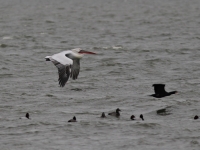 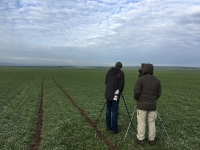 « Check-list of birds likely to be seen on a Spring Birding & Photography Tour in Romania
Natural History Tour in Southwestern Bulgaria and Northern Greece, 10 July -16 July 2020 »